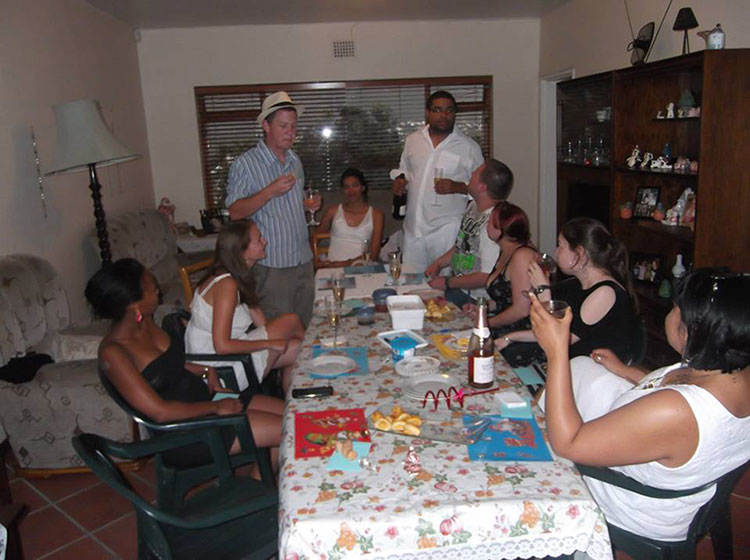 Where it all began for Ronné’s Murder Mysteries?

Many have asked as to when it all started. In 2013, my father had retired, and he thought it would be great to retire in Fish Hoek. This was all great at the time if I hadn’t quit my job and decided to go to college to go study. So, off I went to Fish Hoek from Plumstead, with the parents. I have never moved to a new house before and thought it would be a great idea to have a house warming party so friends and family could see the house. I have never had one. It was the first time that I had ever moved to a new house. What would be fun but a murder mystery? At that time, the internet was sketchy and the board game Cluedo in my room. So, this where it all began.

I have written, plays, movie scripts, scripts for series since I was 13 years old. How hard is it to write a murder mystery game from scratch? Yeah, blood sweat and freaking tears as I didn’t really have a format to follow at this time. The guests were my high school friends and their significant others, and they were all to be seated around the table. The Game had 5 rounds of clues and the person who was to be the murderer for the game was only notified in round three. (Looking back at this makes me thankful that the game evolved). The clues were all over the house too. All the clues that I had, were all hand written. I am so glad that my games have evolved since then as I don’t think I would have survived 2018 where we had hosted 10 murder mystery games with over 200+ players playing my games in that year.

What happened in this Game?

I had made a youth pastor as my first ever killer. This was a huge struggle for her as she didn’t really like the idea of lying. I chose her as she would have been an unlikely candidate to be the killer. Another friend who is a lawyer, made everyone think that he was the murderer which kind of worked in his favour. The killer managed strike and had the taste of her first kill but it wasn’t enough, the lawyer was the first to reveal who the killer was. It was so much fun to see how the wheels turn. I honestly thought that it was going to be the only murder mystery game. I was seriously mistaken.

What did I learn?

Looking back at the first I ever did. I learnt to simplify absolutely everything, don’t over complicate things. Allow the players to play the game. With many murder mystery games out there, you have to stick to script but with us, we allow you to come up with your own storyline as long as you get the killer. Check out the many games on our website www.ronnesmurdermysteries.co.za of check out the albums on Facebook.